Buying a Bird Online? Watch out for Scams 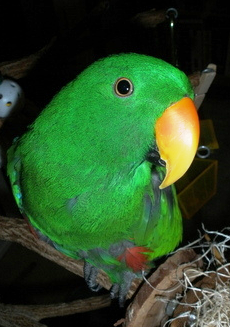 Puppy scams are cruel, frustrating, and unbelievably common. We frequently take calls from pet lovers who have been scammed, and we've discussed how to avoid being the victim of a puppy scam numerous times on our blog.

Often puppy scams consist of people offering to give away (usually extremely cute) puppies at no cost, asking instead for a “relocation fee.”

They typically stipulate that money be transferred via Western Union to a faraway place (that's a huge red flag—never wire money to an unknown source), and then they often continue to request more payments when problems arise surrounding the transfer of the “dog,” which most likely doesn't even exist in the first place.

Recently we've seen a new twist to all of this—we're starting to hear from people who have fallen prey to bird scams, too. They seem to work in much the same way, with the arrangements involving a “relocation fee,” wired money, and routing to Cameroon.

We recently received an email from an animal lover who was contacted about receiving an African Grey Parrot “free of charge except for transportation” for the dubiously low cost of $280. Exotic birds, such as African Greys and also Macaws, seem to be the focus of these new scams. (Note that the realistic costs for shipping such a bird will probably be over $1,000.)

If you are taken in by a bird or puppy scammer, what can you do? Unfortunately the people committing the fraud are difficult to report because they tend to disappear easily and quickly, but you can try reporting them by contacting the Cameroon Embassy (if the scammer worked out of Cameroon) or you can post the information on Fraudwatchers.org.

Please contact PetRelocation if you have any questions about bird or puppy scams. Unfortunately there are some dishonest people out there, so be smart and deal locally!

Editor's Note: This post was originally published in June 2012 and has been updated with new information.