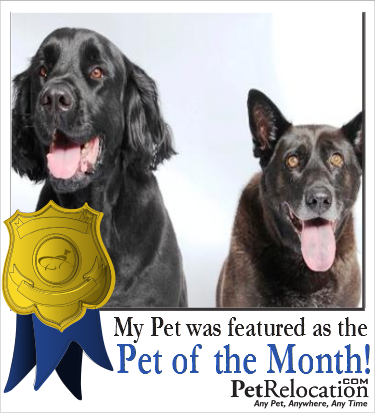 About a year and a half ago we helped Boris and Mia move to the UK with their family, and when life beckoned everyone back to the United States recently, we once again assisted with the relocation. Both moves required careful attention to detail and time to adjust, but the pups did well and the whole family learned a lot from the experience.

The dogs' owner Adrian was kind enough to answer a few questions for us about their relocations, so read on to find some great information about moving pets.

Congrats to Boris and Mia, we're so glad they chose us to help them travel the world safely!

What were some of your concerns going into moving your dogs internationally?

First and foremost our dog’s well being, there are stories floating around about the side effects of flying animals. For example, stress related to the entire moving process, risk of heat stroke (time of year, origin and destination applies), pressure variations within the cabin, and possible injuries due to handling. An additional concern was being able to meet the regulatory requirements (i.e., having all paperwork in order and certified upon arrival).

The most surprising part of the pet move was the genuine help and positive coaching we received from Scotty. We did our homework and researched what it was going to be like for our dogs. However, the constant questions we had and quick response from Scotty helped ease our apprehensions.

How have your dogs adjusted to moving to a new place each time?

When they arrived in England (a year and a half ago), they were very sleepy and could barely keep their eyes open. Their internal clocks were off so it took them a couple of days to adjust to the new feeding, walking, and sleeping schedule.  They also had to get used to new food. Upon their return to Texas this last month they once again had to adjust to the time zone. Thus far, we encountered some minor issues with Mia’s breathing as it was heavier than normal and Boris was salivating more than prior to the move. Of course the vast temperature changes may have played a major roll considering they were used to a much cooler temperature. It took a few days to work out but they are back to their normal barking selves.

What is life like in the US compared to the UK? What adjustments have you made, if any?

The original relocation to the UK took more adjusting from our part (vs. from Mia and Boris).  For Mia and Boris the climate changed from three digit summer temperatures to a below freezing wet winter. This meant more indoor living for them, which they did not mind at all due to the extra attention. For us, because dog owners are common in the UK, and they like to frequently walk their dogs without a leash, we had to constantly coach Mia and Boris not to mind free roaming dogs approaching them. It was a learning curve for all of us. Eventually they got used to seeing other dogs walking by and in one occasion Boris happened to lean in and give a big kiss to another dog passing on a walk.

Additionally, in Chester where they lived, there were many dog parks. This meant that most of the residents were comfortable around dogs. We would have a few people stopping us to pet the dogs and learn about them. Eventually they had a few people in the neighborhood asking for them if we were spotted walking without them.

There were several veterinarians and plenty of pet stores. A charming aspect of living in the UK is that some of the pubs allow you to bring your dog in. So when the bitter cold air is creeping around and the fire is crackling away in a pub, you don’t have to feel guilty for leaving the dogs at home. Some would even provide a doggy bowl of fresh water for them.

The move back to the USA has taken a little bit more time for the dogs to acclimate. They were provided with plenty of fresh water, shade, exercise and rest to help allow them to adjust faster. After a few days they were back to their normal trotting, fence protecting, happy-go-lucky ways. It is obvious they missed being able bask in the sun and run freely in a big yard. 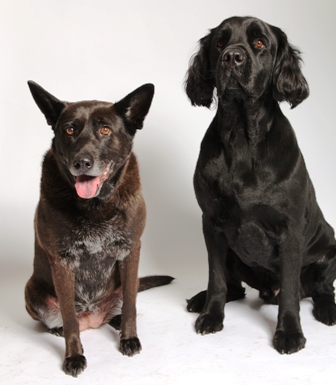 Find out what regulatory agencies come into play and their requirements. Understand lead times for the required paperwork to be processed in order to follow the sequence of requirements carefully. Ensure crates/kennels are large enough for the breed to have room to move freely. Do not feed pets prior to move and exercise them prior to move. Groom them according to destination. Lastly, relax as pets can “pick-up” the emotional state of their owner. That being said, I would like to leave you with a somewhat comical story.

The Sunday before the dogs’ big move back to the States we woke up to what could have been a disaster. We had meticulously put together a packet to include all necessary documentation for their arrival. That packet was laid down on the kitchen table along with several other miscellaneous items (some of which contained food). Not to mention it was placed under some of those items as well. I am sure you guessed it, the only packet that was found on the floor, torn apart and with bite marks all over was their relocation packet.  The food and rest of items were unscathed. Of course neither Mia nor Boris confessed to the mishap (although Boris is our prime suspect). In some way I think this was their way of saying “We know what is going on!” Dogs are smart heart warming creatures and sensitive to their surroundings. The best ending to this story, they didn’t ruin their pet passports.

Excellent stuff! Please contact PetRelocation.com if you have any questions about moving your own pets, and keep in touch for more great pet travel stories.