In 2005 we moved from London to Houston. I didn't know about companies like PetRelocation.com and I moved our cat Butch back by myself. I had managed to get him from Norway to London in 2000 (although it wasn't easy), so I figured I could get him to Houston. What a mistake. I won't go into details, but he managed to sit in a warehouse in Houston for two hours while they tried to find him. Yeesh.

In 2008 we were living in Houston, Texas, USA when my husband accepted a position in Kuala Lumpur, Malaysia! WHAT??? At the time we had two cats: Butch and Max. 2008 wasn't our best year; my 90-year-old father wasn't well, we had the news of the Malaysia move, my father died, Butch was diagnosed with a brain tumor then had to have brain surgery, and then Hurricane Ike decided to show up the weekend before our move, so we packed up a bunch of wet stuff with no electricity.

The only thing that went right that year was Butch & Max's move thanks to Rachel with PetRelocation.com. At one point we weren't sure if we were moving one cat or two, but Rachel was kind and supportive, and when Butch recovered they were both safely sent to Kuala Lumpur. I'm not sure how we found PetRelocation.com, probably Google, but I am grateful everyday that we crossed paths because everything went off like clockwork.

Sadly, two years later Butch's brain tumor returned and was inoperable and he died while we were in Kuala Lumpur. For weeks Max was beside herself, so we decided to find her a friend. Enter Jet, a stray our Malaysian vet found who found her way to us.

Flash forward to 2012 and it's time to return to the USA. There was no question about us using PetRelocation.com again to get Max and Jet back, so I got in touch with Rachel, who I learned had not only survived my insanity during our first move but become the Director of Operations (we're so proud), so she put me in contact with Jon, who got the process started.

By the time Ashley started facilitating our move, things were once again crazy with our KL landlord changing move out dates on us right and left, I couldn't find the right cat kennels in KL for the plane, and I almost missed the rabies vaccination cut off date. But thank goodness Thierry (with Ricted Kennels) noticed their vaccinations had expired when he was delivering the right cat kennels (he drove to KL from Singapore with them) and I got them vaccinated just under the wire!

Luckily everytime something happened I'd get a hold of Ashley and she just went with it. She never said NO. NEVER. No matter how crazy I was with worry or just general insanity. She always had a calming, friendly attitude which kept me from going off the deep end. I honestly feel that everyone involved with the move treated Max and Jet (and Butch in the previous move) as if they were their own pets. So, we owe huge thanks to Rachel, Jon, Ashley, Thierry (Singapore), Dr. Sockalingam (Kuala Lumpur), Rome with Pets On The Go (Houston), Chestnut Animal Hospital (Bellaire) who took delivery of them and kenneled them until we could pick them up and whoever else was involved—we all survived.

After reading this can you imagine what it is like to deal with me? Gold Stars all around to PetRelocation.com and all who work with them!

Photos: Max and Butch in our local Bellaire magazine. Jet and Max their last night in KL. Our first night together as a family in Houston. Jet and Max checking out their new Texas surroundings. 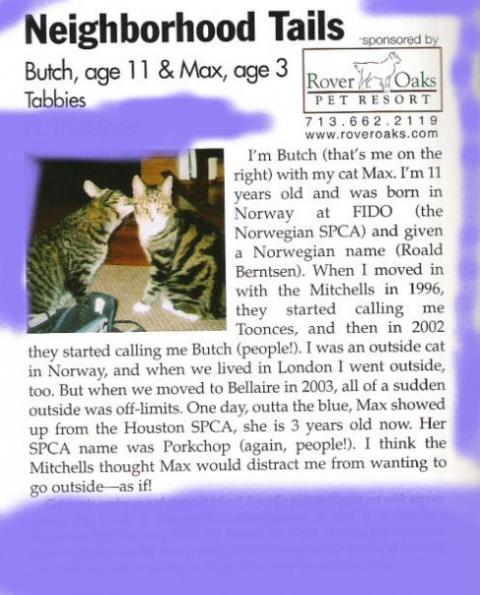 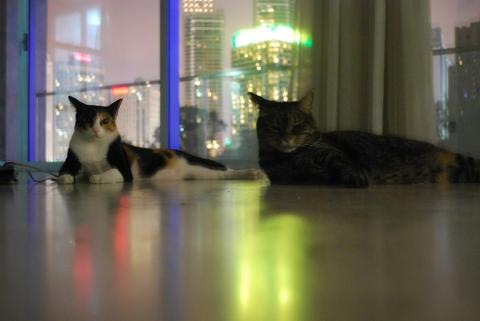 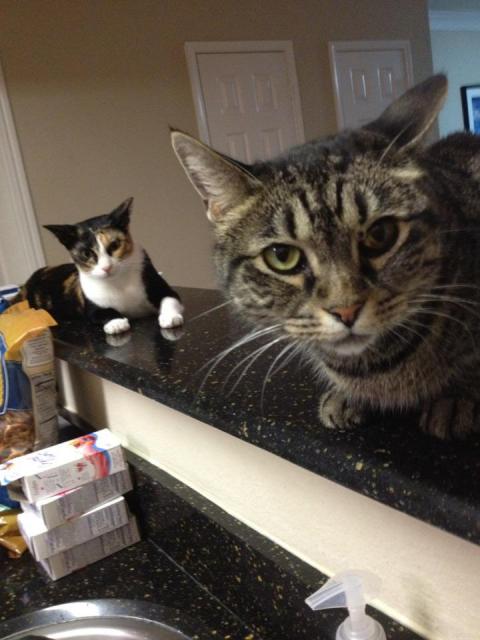 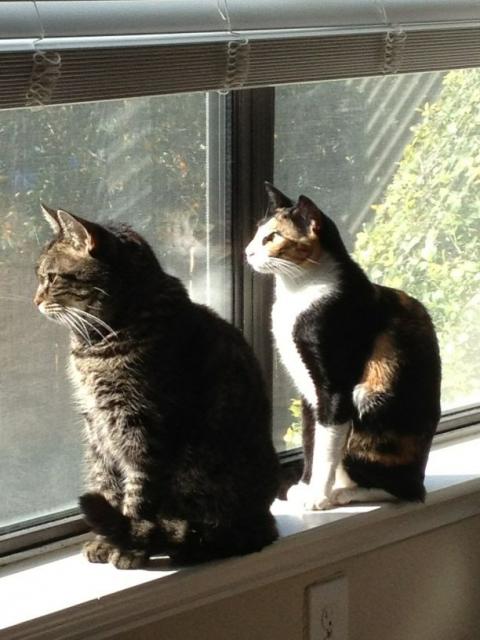