In search of a great learning experience, two of our senior PetRelocation employees attended the 2011 IPATA Conference in Hong Kong. This event constitutes the world's largest gathering of pet shipping professionals, and Cara and Matt were able to learn, share, and pick up plenty of fantastic tips for us all.

Over the next few days we'll be telling you more about their adventures, starting with Cara's firsthand account of what it's like to bring a dog (a very big dog, in fact) from Hong Kong to mainland China.

At 6:15 a.m. on a rainy Wednesday morning, we met downstairs at our hotel to begin our journey across the border between Hong Kong and mainland China with a two-year-old Newfoundland named Kika.

Not only is it challenging enough just to bring a pet across the border into China, but we were also dealing with a 150 lb black teddy bear. As in most parts of China, dogs are not always seen as typical pets. The attachment that Westerners have towards our pets and the way most of us consider them to be part of the family is a foreign concept for many Chinese.

Also, those that do have dogs as pets generally have small (under 20 lb) pups that don’t take up too much room or need a large yard to exercise. With the limitations on space for people’s living quarters, having a large dog just isn't the norm. This cultural attitude would later explain why we saw so many people drop their jaws as we walked Kika by. 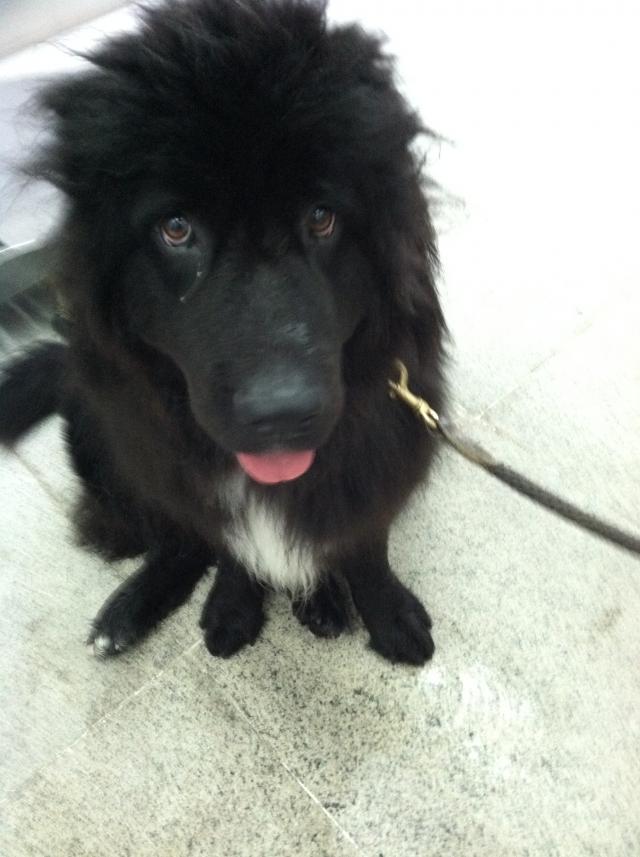 Kika, the star of the day

Today’s plan was to meet the clients, Kika, and their driver in Hong Kong and head to the Lok Ma Chau border crossing, one of the six land checkpoints. After a 45 minute drive, away from Victoria Harbour and towards the lush green mountains, we arrived at Lo Wu crossing. 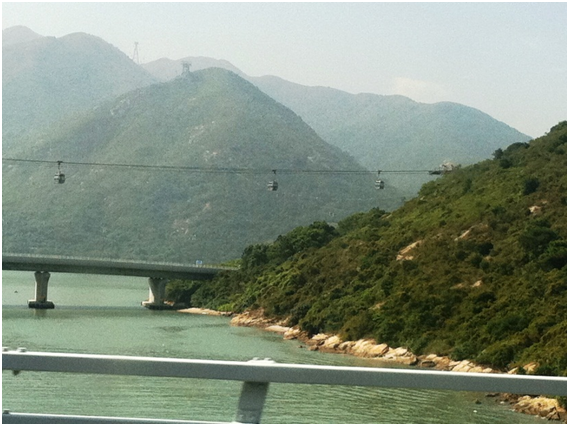 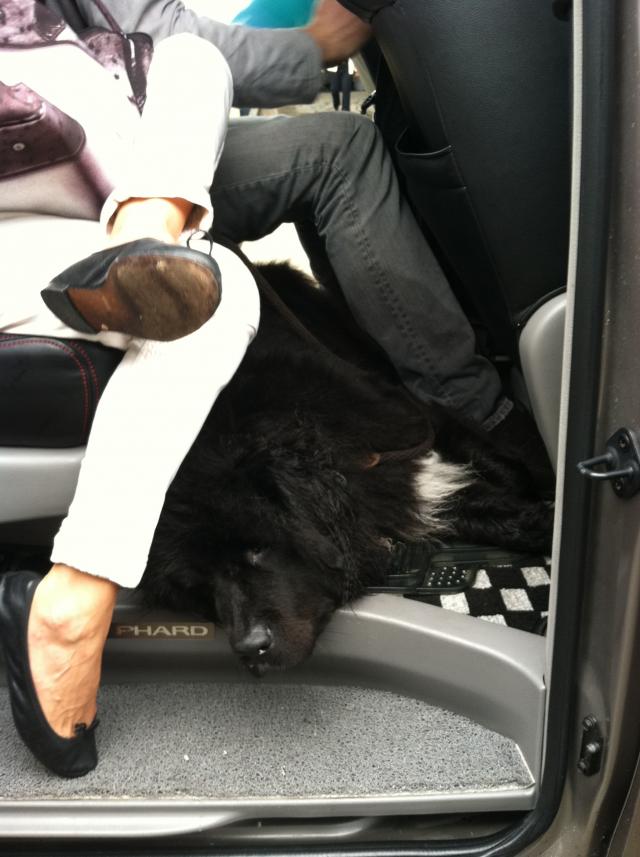 Kika Relaxing in the van

In order for our vans to enter China, we had to have special license plates. Each border crossing requires a different type of license plate, and a separate license plate is required to drive within and enter Hong Kong. 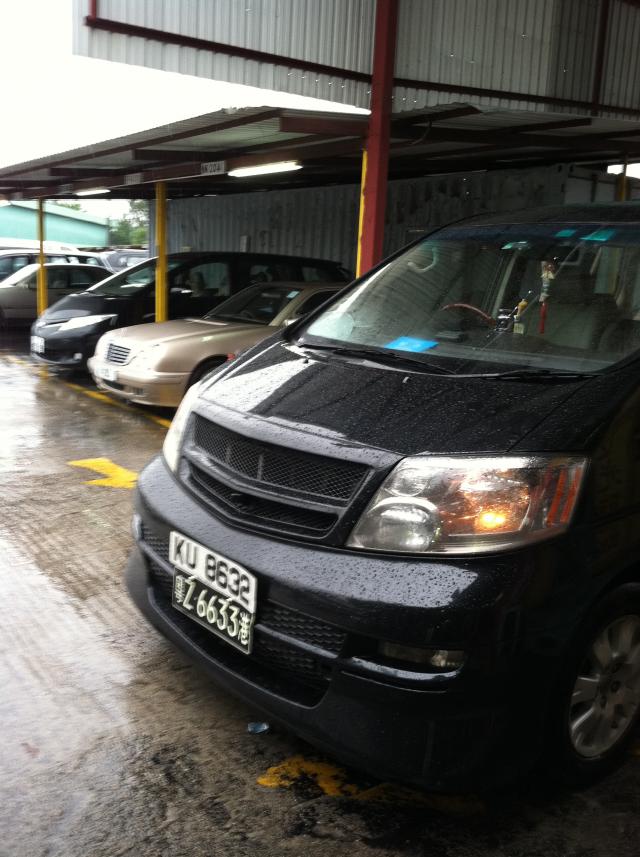 The border crossing consisted of two checkpoints, which looked exactly like tollbooths. Here was the first one: 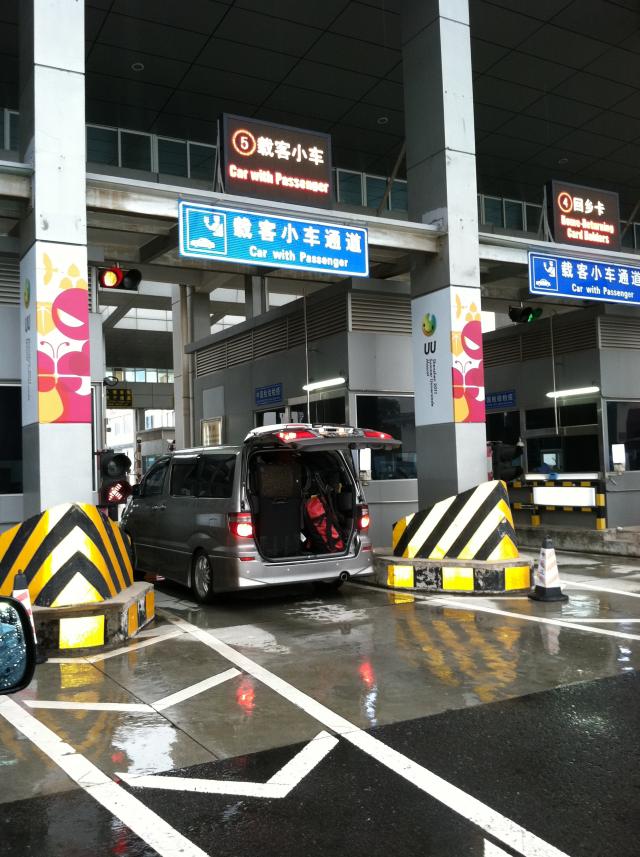 We each presented our passports to the Customs and Immigration Officer for inspection, and they also checked that we had visas. Although we stayed in the car, the officer asked each of us to look closely at her so she could examine our faces and be sure we were actually who our passports said we were. One of the things I found most interesting was the electronic customer service feedback box affixed to the officer’s booth. Here it is pictured below:

How was your experience?

As you can see, the happiest face is the most worn out button. Who knew that Chinese Immigration had such great customer service?

After we made it through the first checkpoint, given that we had a dog with us, we were instructed to pull to the side before heading through the second checkpoint. We were required to bring Kika outside the van and inside to the Immigration and Quarantine Office for detailed inspection of her documentation and to ensure she would be eligible to enter the country. We were allowed to walk Kika on her leash from the van to inside the inspection office. 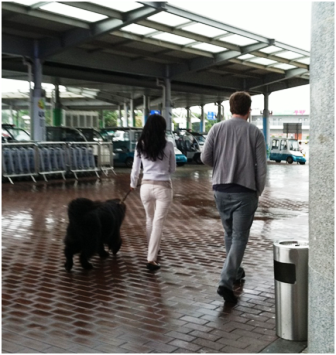 Walking Kika to the Inspection Office

Here is the plaza and entrance to the pedestrian checkpoint and Inspection and Quarantine Office. 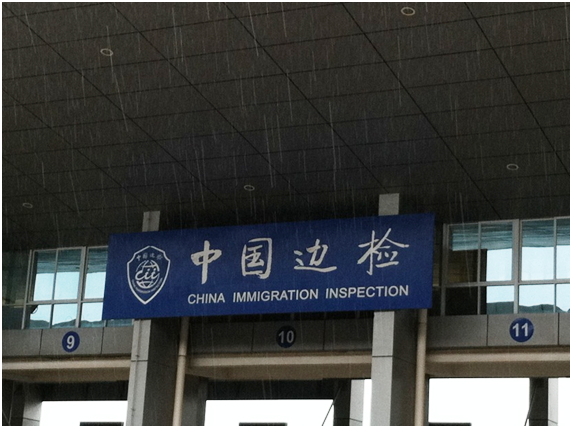 The entrance to the Inspection Office

Once we entered the building, we were led to the Office and were told someone needed to wait here with Kika while her documentation and health documents were inspected. 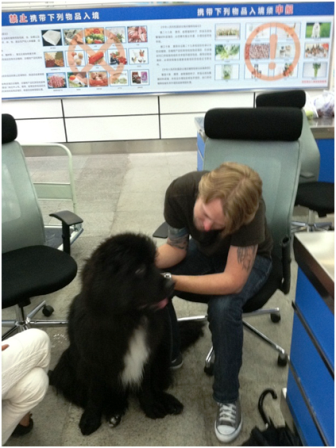 Kika waited patiently (being showered with attention from everyone didn't hurt) 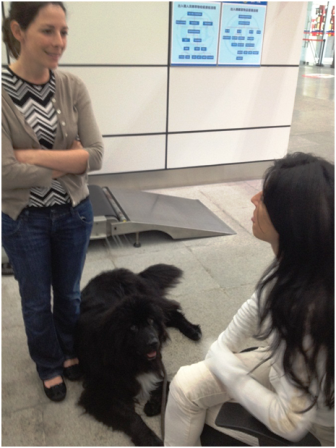 As Kika stayed in one room of the office, her paperwork was brought to another for careful inspection. 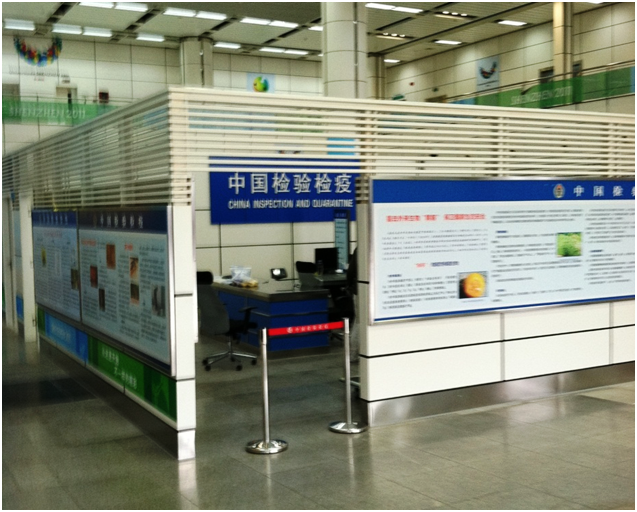 Given that it’s not every day that these inspectors see a 150 lb Newfoundland, they had many questions for us and seemed suspicious of our paperwork. Despite the fact that all of Kika’s documents were in perfect order, the inspectors still had complete authority and discretion to deny her entry. It was invaluable for us to have our local Hong Kong agent accompany us throughout the process, as she speaks fluent Cantonese and Mandarin. 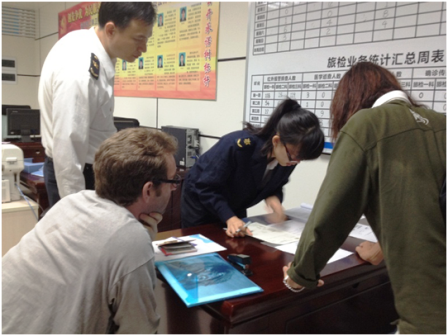 Even though the facilities were clean and the staff was relatively agreeable, the stakes were extremely high and the business was serious. Similar to saying the word “bomb” on an airplane, hearing the words “fleas,” “biting,” or “sick” could have been detrimental. After more questions and document reviewing, Kika ultimately got the requisite stamps on her health certificate and we were on to the next part of the mission.

It took about 15 minutes to pass the “written” portion of the test, and now it was time for the physical inspection. Kika was made to stand up while the officer seemed to give her a pat down. She looked over her face, legs, and backside for any signs of disease or illness. We were then instructed to have her sit down and stand back up. 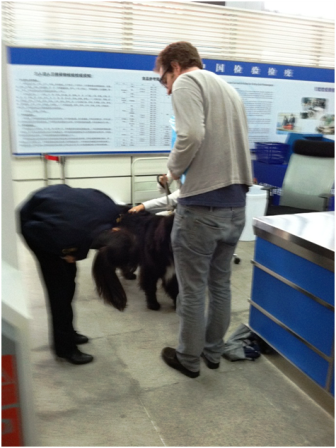 I wondered to myself if she would be asked to shake hands next, or roll over. No, the officer was merely trying to gauge her temperament. Any signs of aggression or threatening behavior would be highly frowned upon and could jeopardize her immigration status. Fortunately for Kika and her owners, she is quite a gentle giant and showed nothing but sweetness. She was also not acting nervous or afraid of her surroundings. 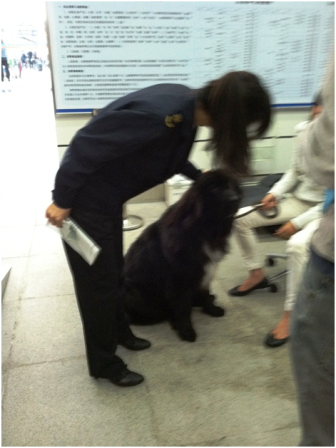 My experience moving pets around the globe taught me that this was in large part due to the owners’ calm energy. Yes she was in new surroundings and didn’t know what was going on, but what did she have to fear if her owners were not fearful themselves? Still, I was grateful of her demeanor, as many dogs would still be nervous no matter how calm their owners were.

There was another aspect that struck me as atypical. The fact that the officer placed her hands on Kika and got close to her at all was a big surprise for me, given that the vast population of mainland China is not particularly fond of dogs. However, as is the case with any stereotype, there are always exceptions.

This particular officer was very young, perhaps in her mid-twenties, and from the “new” generation. Our Hong Kong colleague explained that more and more jobs are being taken over by younger people who tend to be very well-educated and have a larger sense of the world, thus bigger pets (and pets in general) may be on the way to becoming more accepted. Albeit slowly, the times are changing before our very eyes. 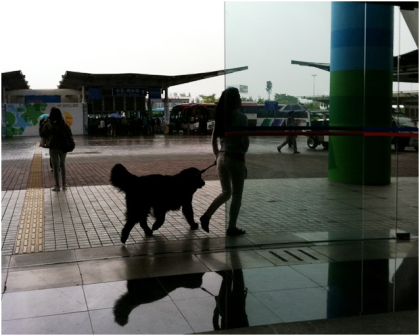 After a quick walk  (past a few more gawkers!), we hopped in the van to go through the final checkpoint. Once that was finished, we headed to Shenzhen International Airport!

Want to know more? Check out Part Two and Part Three of our IPATA Conference series, as well as a run-down of the Pet World Pet Party we threw for some of our former clients.

Need help planning your pet's move to China or Hong Kong? Contact us to discuss your safe move options.

Editor's Note: This post was originally published in November 2011 and has been updated with new information.