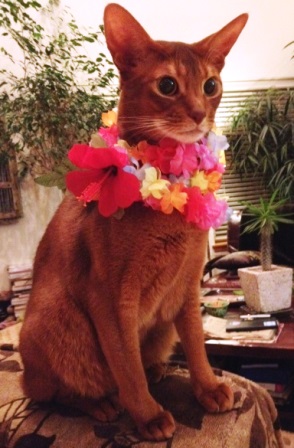 Though there's something special about each and every pet move we carry out, some stories are especially memorable. Meet Mahalo the cat, our featured pet move this month.

After enduring a natural disaster (the 2011 tsunami and earthquake in Japan), Mahalo's owner Marian sent her beloved cat to live with friends in Colorado while she left Japan and searched for a new place to live. When she was able to get settled in a cat friendly condo in Hawaii she knew it was time to bring him home, and of course we were happy to help arrange their reunion.

Read more about Mahalo, a one-of-a-kind cat with a very dedicated owner.

Thank you for speaking with us, Marian! When was the last time you saw Mahalo before this relocation? You surely missed him.

The last time I saw Mahalo was last year around August 2012 during a visit to Boulder, where my friend was taking care of him. We had our high school reunion in Boulder so I stayed with her. The timing was great—I attended the reunion and visited my friend and Mahalo.

What I missed most about him is hard to say because he just IS. He has a presence. He has a matter-of-fact way of getting on with life no matter what the circumstances! I guess if I had to pick, it was his inquisitive nature, his friendliness, and how he would come running when called by name. He also has a sit and shake routine! When I say sit, he would do it and then lift up his right paw for a snack!

Did anything concern you about the idea of moving Mahalo?

For the move from Boulder to Hawaii, I was most concerned about there being a hiccup with quarantine—although I KNEW I had faxed all the paperwork and documents to Mandy. Still, windows of dates create anxiety. I have had pets experience Hawaii quarantine back in the day when there were NO shortcuts, and even with shortcuts you hear of horror stories. I have also shipped cats from Oregon to Hawaii in 2002 so I should be used to it, but in reality everything has worked out and the quarantine people are fantastic. Not sure why I was so anxious!

How has Mahalo been adjusting to life in Hawaii?

Interestingly there have been some changes. Back in Japan, he used to love dark tight corners, like underneath my bed frame, between the bottom of the bed and a futon I stored underneath. Tight!

He also does NOT like the crate at all, even though he did back in Boulder before leaving. In fact, when I put him in there with the fleece he loves, he growled! Gee! But he still sits and shakes on cue! 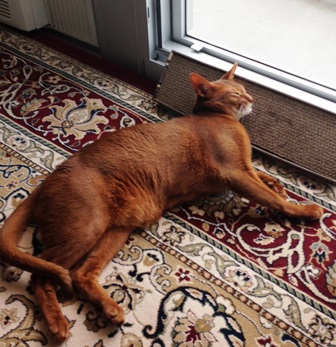 Is Hawaii a pet friendly place to be?

I am a resident owner of my condo and it is a pet friendly complex—a new one, and I wouldn't have bought in if it wasn't. That was a condition when I started looking two years ago; while pet friendly is growing in Hawaii, it is not easy (especially for large dogs or multiple pets). I am planning to get a second cat, but I have to check out the rules.

Homeowner rules are pretty strict in Hawaii even in condos—dogs have a weight restriction of about 25 pounds I think, and one pet is generally the rule. However, some condos have been known to grandfather in long time residents and change rules for new buyers. There are lots of vets in the city and in suburbs so you have to wonder where do these owners live? Small animal vet services are very lucrative and busy.

Boarding starts at about $25 a day and there are plenty of pet sitters, but again I always advise folks to get personal referrals only. Many pet owners want people to come to their homes, and the going price is $25-$35 a day. Finally, there is a Petco in the city of Honolulu and the suburbs as well as Walmart, Walgreens and other stores that support pets, so there is certainly nothing to worry about.

The one piece of advice I would give to pet owners moving to Hawaii is to nail down a place to live first. Be sure it allows pets. Dog runs (mostly in suburbs) and parks I think are available in the city and the beach, but people must pick up after their pet. Of course that doesn't apply to cats; my cats are strictly indoors. I am not a fan of letting cats run amok outside, as Hawaii has a lot of birds and they are tame, which means they are fodder for cats. Also, living in a condo means there is no good way cats can be let outdoors.

You've moved Mahalo by yourself before, so what made you decide to hire the services of PetRelocation this time?

I found about PetRelocation through a friend in Japan who used your services from Florida to Japan back to Florida. Also, I saw you on Facebook after the friend told me about your services. I decided to use your services because I was not planning to go to Boulder to meet Mahalo, as some other issues came up precluding my doing the arranging. Also, after talking to my friend from Florida, I realized I did not want the hassle of taking him to the airport in Denver, yaddah yaddah…. Also that he would be delivered to me in Honolulu was the best part. I did not want to do the send off and pick up I have done too many times.

I liked the prompt response emails from Mandy. She went into detail about every concern I had. I also liked that you have local vendors and that you start the process early on, which was good for a planner like me. I couldn't have done without the hand-holding on the communications regarding departure, arrival, and quarantine. For me, just firing off emails and getting an answer was the best!

Thanks again, and we're looking forward to Mahalo becoming famous. Just as an FYI - he was a show cat in Japan and has won his share of ribbons, although he is now retired. He placed in his class of neutered short hair cats.

Thanks to Marian for sharing this wonderful story with us. We're glad Mahalo is home safe and sound at last! Please contact us for more information about moving pets to Hawaii, and travel safely, everyone.