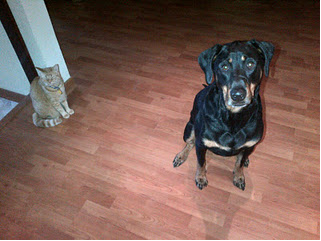 When Fiance decided he was going to take the Mexico position and I decided to go with him, there was no point when I wondered if Mac—our Doberman mix and all around big dog—and our cat, Bubba, were also coming along. Of course they were!

The HOW was a little more tricky. There were a couple of factors that lead me to not tackle moving Mac all by myself.

1. I was nervous for Mac to fly—I've heard not great things about how dogs that aren't carry-on size are poorly treated by baggage handlers.

2. We were scheduled to move in August, the month where heat is its absolute closest to approximating the temperature of the devil's left big toe. Air conditioned opportunities needed to be capitalized upon, and I simply do not know what those opportunities are.

3. Going to another country with critters requires some serious paperwork. I've got my own paperwork to worry about, it would help me out bundles if someone else would worry about theirs.

4. I'd reached my maximum capacity for being scared/ worried/ stressed in this deal. This was an area that someone else can take something off my plate, and do it much more safely than I could. Know when to hold 'em, and when to fold 'em folks.

One Google search later and I found PetRelocation - a company that does nothing but arrange for pets to move with their owners. There were encouraging testimonials, and a mass of reassuring information about how to move your pet comfortably all listed out on the site. Bing-o.

Sarah (our assigned agent) was more than awesome; patient with listening to my all my worries about moving Mac, and on a few occasions when it was getting closer to crunch time, she was kind enough to offer a comforting ear about move-related issues that were not at all Mac-related (it took a ridiculous amount of time to get our all Earthly possessions through Mexican customs). That's not a service listed in the contract, you know. I like to think it was just a little perk thrown in for my own benefit. 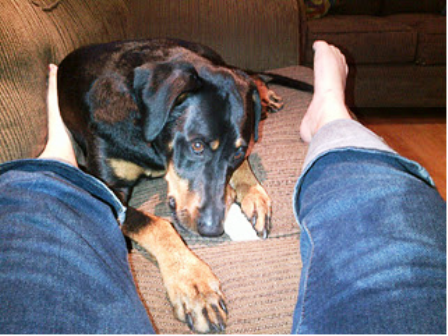 She also helped coach me a bit on what to do with our cat - little as he is, he could fly with me in the cabin, once we had the proper paperwork.

A quick FYI for anyone who may be going through Detroit Metro with a cat—that Whale-song art installation tunnel thing you have to pass through? That got some pretty loud and terrified caterwauling out of poor Bubba. But he survived the minor trauma of colorful lights and harmonious sounds just fine and dandy, and upon arrival got right to work hunting the little geckos that are so common down here.

Like I said before, Mac's not a little dog. I didn't know he'd get quite SO big (he's about 100 lbs) but he loves me, he loves the cat (he tries to purr sometimes, it's ridiculous), he loves Fiance, and he loves little kids. Right now we're sitting on the couch as I type, and he's next to me with his nose stuffed into my thigh because the A/C is cranked up and he's cold.

With Sarah's very specific guidance and with the help of my future in-laws, who watched Mac until it was time to fly, last week Mac had his vet appointment and got his official paperwork. He and his giant crate were loaded with care onto a plane, and made an epic three-day journey to Monterrey. 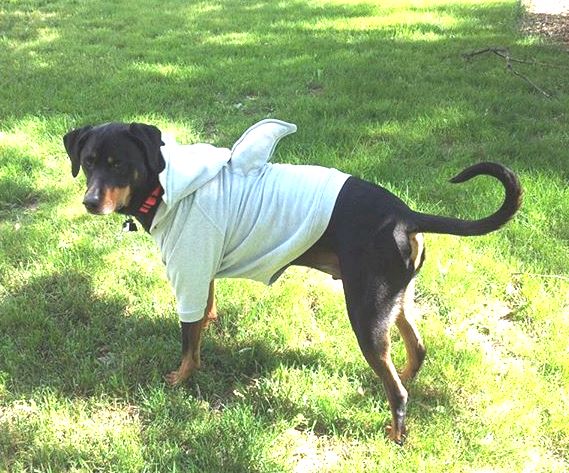 A connection in Houston, a connection in Mexico City… and then remember that part where I said he was big? He's too big to fly directly into Monterrey, so PetRelocation DROVE HIM from Mexico City to Monterrey. That's a 10 hour drive, which I'm sure was just about the best thing to ever happen to my car-happy puppy, but on PetRelocation's part, well, that's just pure dedication to service right there.

Mac hopped out of that car Friday afternoon and bowled me over, tail wagging, tongue making up for lost face-kissing time. I have a bruise on my chin to prove it. Then he checked out the whole house, said hi to his gato brother-from-another-mother, peed on the concrete patio (paying no mind to the astro-turf I bought expressly so he could pee on grass and not feel weird about doing business on concrete), and then hopped up on the couch with me and a chewie to settle in like he'd never missed a beat. About fifteen minutes later he was snoring so loud you'd swear we had a pet bear.

I was worried he was going to be mad at me for stuffing him in a box and putting him on a plane. He was just happy to come along for the adventure.

And of course, he was elated to resume his official job title of “Warm-Spot-in-the-Bed Thief” (see photo - Worth noting he's pretending to be asleep so I don't make him move. Too bad his eyes are open).

Thank you to Sarah and PetRelocation for keeping our wonderfully big dog 'gainfully employed' with us.

Ready to start planning your pet's safe move? Contact us to get the pet transport process started.