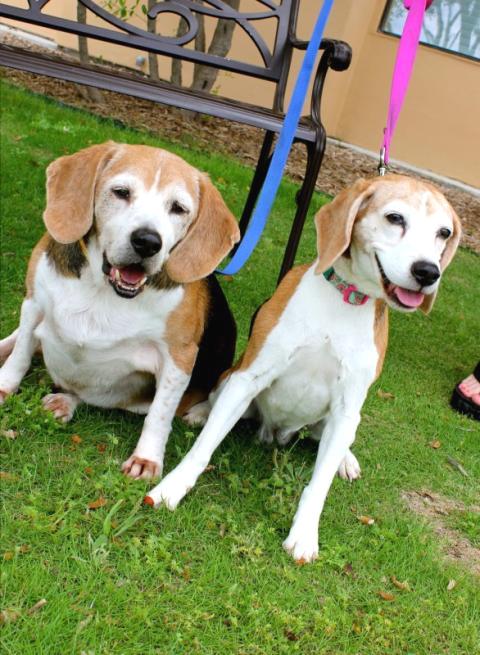 "Ralph and Riley's International Relocation from Texas to Wales!"

My kids are Ralph (11 Years old) and Riley (9 years old) and here is the story of their move from Texas to Wales. I moved to the United States from Wales 20 years ago and made the decision to finally move back to my country to be with my family.

The decision to move was the easy part; the decision that affected my kids was the hardest part. I knew this would mean them flying in cargo, and my dogs having to fly below me confined in a crate for 10 hours was the painful part. Ralph had never been crate trained. He has slept in my bed for 11 years.... Riley is my rescue dog and entered our lives a year and half ago and slept right next to Ralph.

I began the steps of researching "how do I move my dogs" and came across PetRelocation. I emailed them and the very next day I received a phone call from Jon. He was so friendly and put my mind at rest that people move their dogs in cargo all the time and it is perfectly safe. I had read so many horror stories online and it was keeping me up at night. Jon explained how the process worked and discussed payment options, which conveniently split the total cost for both dogs into two payments. Jon showed me the link on Amazon on where to buy the kennels and the metal screws that are mandatory for air travel for added safety.

I signed all the paperwork that was needed and made my first payment and ordered the kennels. Jon explained I would have a pet relocation specialist that would be assigned to me, and that was Katy. She reached out to me the same week and introduced herself and from there she was my point of contact. I had her cell phone, office number, and email and she was always available for any questions.

I received the kennels within the week and I assembled them. I began getting the dogs acclimated to them. I would use treats to entice them inside and it took work, but both dogs got to the point where they would enter without problems. The timeline that Katy sent me was using all the time possible to get them used to the crates and spending more and more time in them.

I wasn't able to leave them in their crates while I went to work due to the long hours I worked. I also had them go to day care due to my job, and in that environment there was not enough time to dedicate to just my two dogs and their crate training. I also sold my house and had to move into a hotel until my departure date. This confined my schedule of training even more with the dogs now at day care full time and spending every night there.

I would go and pick them up and drive around with them in the crates in the car. On my days off I took them on long rides. One weekend we drove over 6 hours round trip. Ralph would bark for two hours non stop but was finally getting used to his new crate and relented and fell asleep. Beagles bark so this was no surprise, but I found myself researching how long can dogs bark! Seeing Ralph finally fall asleep after 2 hours in his crate was reassuring. 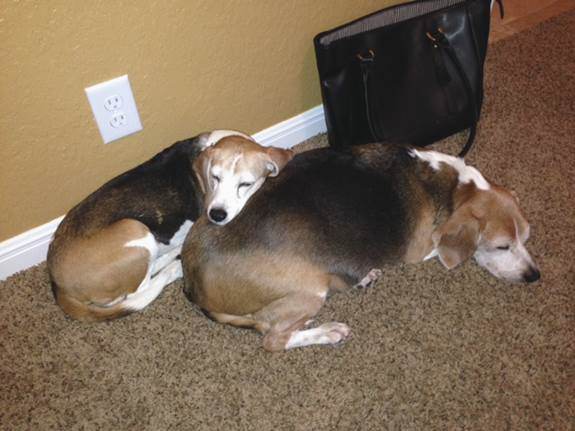 Katy sent me the timeline and the dates for the final vet appointment and contacted my current vet and the USDA vet that I had to see prior to leaving. There was a ton of paperwork, and Katy made it very easy for the USDA vet who received it all in a Fed Ex package and everything was highlighted and post-it-noted for what needed to be signed where. The vet even commented that this was the first time she had worked with a pet relocation company before and how easy it was with the paperwork and organization of the packet.

I met the USDA vet four days before we left. Both dogs had a full exam. (I was not expecting to pay almost $500 in addition to the fees already paid for the relocation, so that was a cost that you need to be prepared for once you meet with the USDA vet.) I dropped the paperwork at Fed Ex that was being sent to the offices in Austin for final approval for USDA. PetRelocation kept me informed on the status and all paperwork was delivered to the pet taxi company Pawstin, who I would be meeting on departure day.

Mike with Pawstin contacted me the day prior to organize where to meet. We were to meet at the cell phone lot 5 hours before the departure. This was to ensure he was able to meet the dogs and transport them over to cargo, and they required 4 hours prior to departure time. This was concerning, as this was 5 hours in the crates in addition to the flight time. I walked both dogs with a long walk prior to meeting Mike. He arrived on time and was super friendly. He talked a lot about his own dogs and that put my mind at rest that he would ensure my kids were looked after right up until he said goodbye to them at cargo. I asked him to let me know if they get a potty break before leaving, as I had read that cargo staff let the dogs out one last time but wanted to be sure. I said my good-byes to Ralph and Riley at the cell phone lot. It was very hard.

Mike kept in touch with me via text message. He sent pictures of the dogs and let me know cargo do not let them out. He took them out for me one last time before he left the cargo. I was so grateful to Mike and for him keeping me posted on the cargo process. 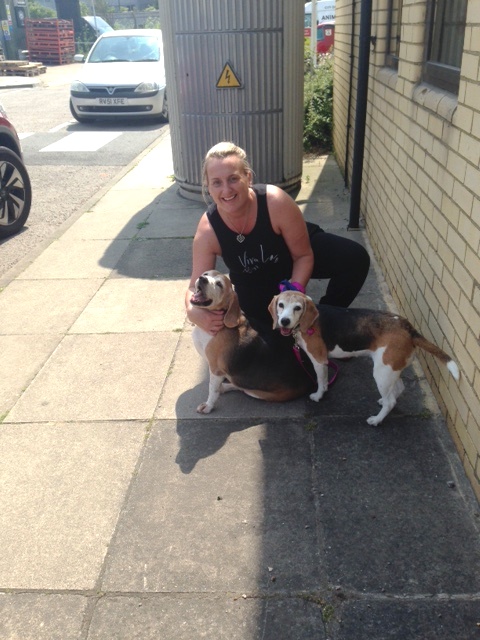 The flight was delayed one and half hours leaving Austin. I asked the guy at check-in if I would be contacted once my dogs were safely on board. He didn't know. No one seemed to know anything about Cargo. I flew British Airways, who pride themselves on pet travel, but I was very disappointed in the lack of knowledge on transporting cargo. I felt like I had to keep reminding them that they are not a package; they are live animals.

The guy who checked my bags told me he would find out and he would be at the gate when I got on the plane. I was standing there waiting to board anxiously waiting to hear news of my dogs when I finally saw the guy that had checked my bags. He came to me and told me the dogs were on board and were well. This was 6 and a half hours since I last saw them and we still had a 10 hour flight.

I was walking down the ramp to enter the plane and saw airline personnel with rain jackets on. It was raining pretty hard and they were wet. I asked the guy if he had just been in cargo and he said he had. I asked him if he had seen my dogs and he said he had and they were fine. Ralph barks a lot but the guy reassured me both dogs were calm and quiet. This was a relief to hear!

Flight finally took off and I just wanted the next 9 + hours to pass quickly. As we were about to land, I asked the flight attendant if she had any communication with the cargo crew once we arrived in London. She didn't know but would ask her manager. I explained to her I just want a wellness check on my dogs, as I knew there would be several hours wait on deplaning and heading to the Heathrow Animal Reception Center before I would know if they were ok.

Once the flight landed and we all began to get up and leave, I saw the cargo truck pull up and I tried to see if I could see my dogs being taken off but I couldn't. As I was leaving I saw the same flight attendant and she apologized but found out that they do not have any communication with cargo.

Made my way to baggage claim, passport control, and finally out the door to my family waiting for me. Loaded up the car and off we went to Heathrow Animal Reception Center. From the moment I walked through the door, they were super friendly and inviting. The lady asked my name and the pets information. She left and came back 15 minutes later advising me and my sister that both Ralph and Riley were fine and there were outside and I could probably hear Ralph barking. I was a mess and between the tears thanking her for letting me know the dogs were well. 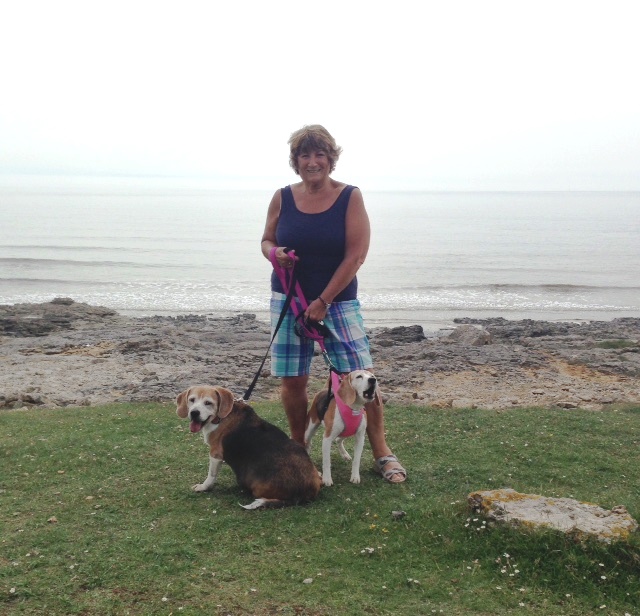 They had advised that the wait time could be up to 5 hours. PetRelocation had advised to travel on Thursday to avoid the weekends and heavy travel. I also traveled before end of May, as there is a heat restriction imposed to avoid high temperatures and British Airways do not fly after June 2nd out of Austin. All in all the place was not busy on Friday morning when I arrived and I waited around an hour from the time I walked in.

When I saw Ralph and Riley, they were totally fine and excited to see me. I probably stressed more than I needed to. Granted the blankets were pretty soiled in the crates so they had a few accidents, but they were healthy and happy to see me.

We have been back home in Wales for a week now living with family until we find our own property. They are stuck to me like velcro! New surroundings; new smells. I am taking the summer off so spending every day with them. There are so many walking trails and we have also been down to the beach, which is a 10 minute drive from where we live. They are being spoiled by the family and loving all the attention. They are very happy in their new home.

Thank you PetRelocation for all your help and assistance in moving me and the beagles internationally! I know this is a rather long testimonial, but I know how I felt researching all of this and hope this helps the next person in the same boat I was in.

Planning your pet's move to the United Kingdom (or elsewhere)? We can help! Contact us to connect to a Pet Relocation Consultant today.