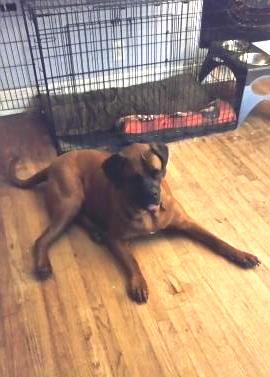 “Welcome to the United States, Bear!!!”

Bear came about through my husband John. A co-worker of John's could not bring Bear to the United States as he was too young, so John became his new owner.

John and I have discussed bringing Bear to the states when it was time to. So John looked up several companies that transported animals and he chose PetRelocation, what an AWESOME company!!!!

We worked with Jon and Kelcey and they truly care for the animals. We were sent the timeline of where Bear would be going before leaving Korea and traveling on to Atlanta. We were sent pictures of Bear and he looked happy.

We were also sent updates of where Bear was and when he landed. My son and I drove 5.5 hrs to Atlanta to pick up Bear after he landed. He didn't want to leave his crate, but once out he was so happy. We made several stops to let him stretch his legs and do his business.

We made it home late and he was soooooo excited to meet his brother and sister dogs. They were not too pleased, but slowly and surely they are warming up to him. He just wants to play and they aren't so sure, since he is so big.

Thank you so much for the awesome flight for Bear and ease of getting him from the airport.

Are you in the process of researching your pet travel options? Contact PetRelocation to set up a consultation today.