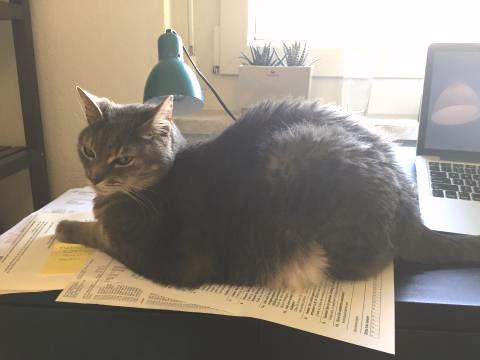 So I've had Calvin for eight years now, and I had to leave him behind already for one international move when we went to Australia for five years. It was heartbreaking saying goodbye to my little furry baby, and even more heartbreaking when we went home to visit every year.

He would go through his sassy stage and pretend like he forgot about me, then he'd start warming up to me, and a couple days later he wouldn't stop following me around the house and wouldn't miss the chance to cuddle up with me at night. He always knew what it meant when we were packing the suitcases again.

So this time, when I moved overseas again to Switzerland, I promised him that I would get him out here one way or another. That proved harder and more complicated than I had previously thought, but four months after I moved here, we (my parents back home) and I chose to go with PetRelocation to get my baby back to me. It was a complicated process, which I don't think would have been successful without the help of these guys, both in the US and here in Switzerland.

However, when Calvin finally arrived, I knew he was in good hands. I can't say he was happy to have had the chance to go on his first overseas trip, and he did spend his first full day of jet-lagged-ness hiding under the first bed that he could find, but two days later he was back to his old affectionate, treat-loving self. And, as you can see, I get way more paperwork done with him here than I ever could alone.

I'm very happy that we made the decision to move Calvin and use this company. What is home, anyways, without a cat to distribute fur on all of your black clothes and to wake you up at 5 a.m. every day?

Need some help reuniting with your favorite pet? We'd love to help! Please contact us for a pet travel consultation at your convenience.