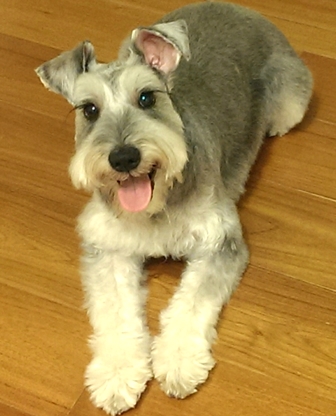 This month, our featured pet move will introduce you to two very special, and very loved, Miniature Schnauzers named Kreuz and Legos.

Though they encountered a few typical obstacles (moving to Taiwan isn't easy), they completed their journey from Seattle to Taipei safely and are now home with their owners where they belong.

If you've ever loved a pet, you'll identify as you read this month's featured move story, and you'll also surely join us in wishing these two pups all the best. Read on for the details, and thanks to Legos and Kreuz's owner Jerome for sharing such great and helpful information with all of us!

Have you ever moved a pet internationally?

No we haven't, it's not something I ever thought I would do, either.

First off, you need to understand that one of our dogs, the older one, Kreuzfidel a.k.a. “Kreuz” (pronounced Cruise, like Tom Cruise but not named after him), has some anxiety issues. We got him at the ripe ol' age of four months, and from the very beginning he has been easily frightened of strangers and loud noises, so you can see the challenges that go along with handing him over to the care of strangers (a moving company, airline personnel etc.), then not to mention the actual airplane ride itself.

Both of our dogs are our most valued… dare I say property? They are our substitutes for children. Nothing can or will take precedence over their well-being. While our dogs get regular check ups at the vets, we still had to re-vaccinate both of them with the rabies vaccine so that we could provide documentation of said vaccine and then a proverbial clock began from that point—one of the hoops we had to jump through in order to bring the dogs into the rabies-free country of Taiwan.

We began getting the dogs ready for their big move a couple months before departure by getting them accustomed to the dog crates they would be flown over in. Now mind you, we had already moved ourselves, and the dogs were still at home with their Aunties Beth and Wendy and Hayden and their girlfriend Maggie, who is about two years old herself.

From this point forward I will refer to the Aunties as “The Girls.” The Girls trained and prepped the dogs very well, to the point that they loved their new beds inside the crates. Most of our concerns were alleviated by The Girls and the loving care they gave our dogs while we were separated.

Another concern was the routing planned for the dogs' flight. Seattle to Frankfurt (or somewhere in Germany) with about a 12-hour layover then Eastward to Taiwan. Being incredible team players at PetRelocation, Tyler (our assigned agent) worked with us on getting them on a direct flight from Seattle to Taiwan, which cut about 20+ hours off their trip. 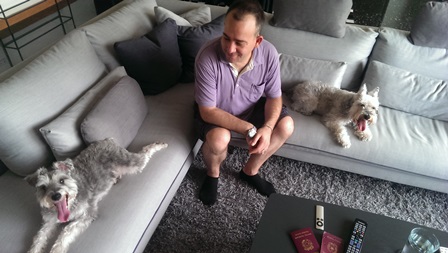 Yes. How valuable Tyler and everyone at PetRelocation actually were. It's not cheap to move an animal internationally, but Tyler's response times to any question, no matter how neurotic in nature (being from a stressed owner) and her reassuring professional, personal, and supportive attitude were a very welcome and appreciated surprise, to say the least.

How are your dogs adjusting to the new location? 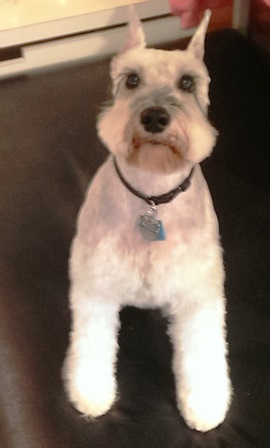 Our dogs are doing very well thanks to all the love The Girls poured over them, the wonderfully executed plans of Tyler and PetRelocation, and being back in the loving pack they know as their family. We have known a couple of people who came here for work from the States and moved their dogs, which is where we got the recommendation for PetRelocation.

The dogs were undoubtedly very freaked out when they arrived, but we were able to see them very early in the morning before they passed through customs. We felt that once they could see us that they would know we were there and it would help to reassure them, which it did! They lit up like the skies at dawn. They knew we were there and that everything was going to be okay, and it was.

What is life like in Taipei so far? Do you think it's a pet friendly place to be?

Our lives are so much better now that we have our dogs with us! Life in Taipei was/is a BIG adjustment for us all. Taipei, Taiwan (or just Taiwan in general) is an incredible place to visit, live, whatever! That being said, pets in Taiwan seem to be considered as accessories. If a movie comes out with a dog or a cat, suddenly everyone wants one! Then sadly, after the pet grows up or at least until the new owner figures out how much responsibility pet ownership is, they sometimes decide to release it.

Of course this isn't what everyone does, but it's interesting to see all of the feral animals living in such a highly populated city. Across the street from us is a park (we picked this apartment just for the park because of our dogs) and there is a pack of feral dogs living there. Pets here are not taken to heart as much as they are back in the states. Again, that doesn't go for everyone here, but it's a much higher percentage than I have ever seen.

That being said, we have taken Kreuz to the vet here once for a benign cyst on his leg. The vets here seem as capable as any back home, but take away any comforting aspects, no private exam rooms, no comfortable waiting areas etc. Also, procedures are done on animals in plain view of everyone (with the exception of surgeries, as they do have proper surgical rooms for such treatments).

They take a very no-nonsense approach to everything here, not just animal welfare. It is probably one of the most pet friendly places I have ever visited, though, as I have been to several restaurants where animals are not only allowed, but they are served alongside their owners!  Pet stores are all over the place, although finding a good quality dog food can be a bit more difficult. After visiting no less than seven different stores I have finally found the three different stores I now use regularly.

There are a lot more environmental hazards to be wary of here; cars of course, but also scooters (they drive on the sidewalks here), bicycles, and other feral animals. The other big factor is the weather. It is very hot and humid and took some time to adjust.  Some days the dogs cannot be outside any longer than what it takes for them to go pee. We now only go to the park to play early in the morning or in the late evening before and after the heat of the day.

Overall, life for pets and their owners here in Taiwan is very nice and accepting. There are very few locations that actually have leash laws; you see dogs walking off leash everywhere, and the best is seeing them riding on the scooters with their owners in the basket on the handle bars, in the foot well of the scooter, or even in those child harnesses, and of course in various strollers/backpacks or purses.

While I do mean that, more practical advice would be this: don't over stress about the overall process, as it's going to be stressful enough without adding unnecessary anxiety to the pile. Research your destination and find out laws on immigration, quarantines etc. Don't overlook any aspect of the new life your pet will be adjusting to, including small things like humidity and its effects on your dog's skin, (or insect bites etc.), but above all, the more investigation you do beforehand, especially through word of mouth, the more you can reduce the stress you and your pets may feel before, during, and after your move.

Why did you decide to hire help with your move?

We decided to use your services because we wanted every single bit of help we could get to ensure our dogs' well being. We could have put our dogs on the plane and flown them here, but whether or not we would have had the correct information as to what paperwork was actually needed and been able to complete the proper steps in vaccinating and everything, that would have been a gamble that we were just not prepared to make.

We are all very grateful to everyone at PetRelocation who helped us relocate our family safely and efficiently.  Thank you all!

Looking for assistance with your pet's international relocation? Contact us to set up a pet transport consultation.