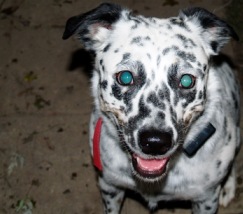 Incredible Experiences: A Dog Relocation to the UK

Congratulations to Marshmallow for being named our Pet Move of the Month! This Dalmatian mix traveled from Maryland to the UK when her owners were called overseas, and we were happy to help them navigate the process during the hectic time that military families must so often face.

This was the family's first pet move and they had all the typical concerns (safety, paperwork, costs), but in the end everything turned out well and Marshmallow is enjoying life in the UK with all her favorite people. Her owner Tarnna was kind enough to share the full story with us below. Read on to find out more about Marshmallow's military move!

We didn't want to put Marshmallow through the stress of a long flight only to arrive and have to be quarantined, that would have been devastating for her and our family.

Another big concern for me was how much is was going to cost. Moving internationally is not cheap, even if the military pays for some of it, so adding in this cost was a worry.

Did anything surprise you about the pet moving process?

I was shocked by the price to move a pet. Not just with this company, but every company I contacted and even trying to do it on my own. It is not an inexpensive thing to do and it made me change my thought process about military members who move around.

Most of the time military families will just give up their pets when they PCS, and I could never understand why until now. Luckily for us we had saved for emergencies and this seemed like a good time to use it.

Another thing that surprised me was how dismissive of my concerns some companies were—luckily not this one—but many that I contacted were and even the airlines directly. Getting these types of responses from other places is another reason I went with PetRelocation, everyone seemed genuine and like they actually cared that our animal got to us safe and sound. 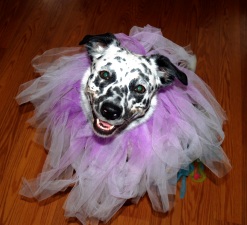 How is Marshmallow adjusting to her new home?

Marshmallow loves our new home, just like we do! When she first arrived she was a bit scared and confused but she quickly settled in. The only thing that has changed is she has a bigger back yard to run around in, which keeps her happy. She has actually lost some weight from all the extra playtime she is getting. She was always a pretty laid back, good dog and nothing has seemed to change that.

How is life in the UK? Is it a dog-friendly place to be?

The UK seems to be a pretty dog-friendly place to be. We haven't searched out any dog parks yet, but we have taken her hiking, where she was loved on by everyone that passed us. Other than that we have only been here a little over a month so there aren't too many stories.

To other people who are moving I would say that they need to understand that if they want their pet to arrive in good condition it will cost them, but in the end it is so worth it. I would also say to people to go with their gut feeling about a company who is moving their pet; if you get a not-so-good feeling there is probably a reason. They are your pet and they are a part of your family and they deserve to be as comfortable through the moving process as you do!

At first I was put off by the cost, but after dealing with other companies and the airlines I realized that I could not do this on my own and saw that PetRelocation was actually the best company to go with. Like I said earlier, everyone I dealt with from my first call to the gentlemen who brought her to our home in England seemed like they really cared about her and animals in general, and they didn't put my concerns on the back burner. There are good people working for this company!

Once I decided to hire PetRelocation it was like a huge stress filled ball was lifted off me. I had enough stress just trying to get me, my daughters and my house ready all while worrying about my husband, who was still gone. I felt defeated for awhile in the process and was feeling I could not get her here, but once I hired this company I knew it would be okay.

That may sound dramatic but this was the most stressful move I have had during my husband's military career, and we have moved a lot. Nothing was working out and everything seemed to be happening to hinder our move, so when the things with the dog worked out it brought some much needed sunshine. I enjoyed all the people who helped us through the process, everyone had their part, and they did it well. We are planning on using PetRelocation for our next move and I have referred my sister and brother-in-law to PetRelocation to move their dogs during their next move. They are also in the military and coming to the UK in November.

Hopefully I didn't get too mushy, but we are very grateful for everything this company has done. We really feel like everyone went above and beyond and worked with us and their team to get us our dog!

Need some help with a pet move of your own? Contact PetRelocation to discuss your safe pet transport options.