The prospect of moving can be both exciting and overwhelming—that's according to Stacy, the owner of our featured Pet Move of the Month. That seems to be how most of our customers feel about pet moves, which is why PetRelocation is happy to step in and help move treasured dogs like Neely when the family is called overseas (it was for military reasons in this case).

Military moves can be especially daunting, but Neely made the trip just fine and is doing well in her new place. Read on to find out the whole story (you can also check our blog for even more info about this pet move).

Congrats, Neely! We're so glad we could help you in your journey across the pond!

Is this the first time you’ve ever moved a pet?

The two major concerns that I had when it came to Neely’s move were her safety and the possibility of her needing to be quarantined.

Why did you decide to use PetRelocation to help out with your move?

I decided to hire your services because it took the work out of trying to figure everything out. Also, after reading all the great testimonials I knew Neely would be in great hands and would arrive home safely.

It wasn't that I found anything surprising, but I would say that some of the steps that were required in order for Neely to travel were a bit confusing at times. We were traveling to the UK during a time where a majority of the rules were changing rather quickly, thus making it difficult to keep up. That is why I am SO glad that we had the people at PetRelocation there to help us. With all the things that you have to remember to do in order to prepare for moving, it was a relief to know that I didn’t have to worry about keeping track of all the rule changes and requirements for Neely's travels. 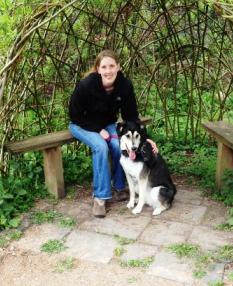 How is Neely adjusting to the new location?

Neely is loving England! On her first day here she just slept the day away in an attempt to recover from doggy jet lag. It has taken her about a week or so to settle in and adapt to all the new sights and smells, but now its like she’s been here forever!

What is life like for pets in the UK? Is it a pet friendly place to be?

The town where we are living at in the UK is in the Lakes District and is very pet friendly. Many of the dogs here are very socialized and are often off leash. Some of the pubs and stores even allow pets in, just as long as they are well behaved. There are plenty of footpaths where we can go on walks and there is a very nice park in our area as well. On weekends we often go out for long hikes, which Neely loves!

When we first arrived here I had set up a vet appointment for Neely to make sure that there were no other vaccines that she needed, especially because there is so much livestock around where we are. I also wanted to make sure that her current heartworm prevention and flea and tick treatments were appropriate for the region. The vet we took her to was extremely helpful and thorough. We had copies of Neely’s vaccination records from the states which definitely helped the vet figure out what she had already been vaccinated for and what she needed boosters for in the future.

There are plenty of small locally owned pet shops in our town as well as some chain pet stores in some of the larger towns (which are not that far away) for pet food, toys, etc. One thing I would advise pet owners to do before moving is to make sure that the local pet stores carry the brand of food that your pet is currently eating. When we came over here we found out that the brand of dog food that Neely was currently eating was not supplied here at the local or chain pet stores. As a result, we had to switch her food over to something else, which was kind of a pain because Neely is a fussy eater. The only un-pet friendly thing we found about the UK was trying to find a rental property that allowed pets.

The advice that I would give for anyone who might be planning a move is to prepare as far in advanced as possible, educate yourself on the process, and ask TONS of questions. This will greatly help in reducing the amount of stress that is involved with moving because you won’t find yourself running around trying to do things at the last minute. Also, make sure you have copies of your pet’s full vaccination record as well as any records in regards to illnesses or procedures that he or she may have had.

And just out of curiosity, where does the name “Neely” come from?

Neely was a rescue dog that my mom had found for me through Petfinder.com. When I had adopted her that was the name that she had came with. I was thinking about changing it when I brought her home, but she already new her name at that point. However, she does have a nickname of “Bean” that I call her very frequently. She earned that nickname because she was only a tiny eight pound pup when I got her.

Looking for help with a move of your own? Contact PetRelocation to discuss yous safe pet transport options.