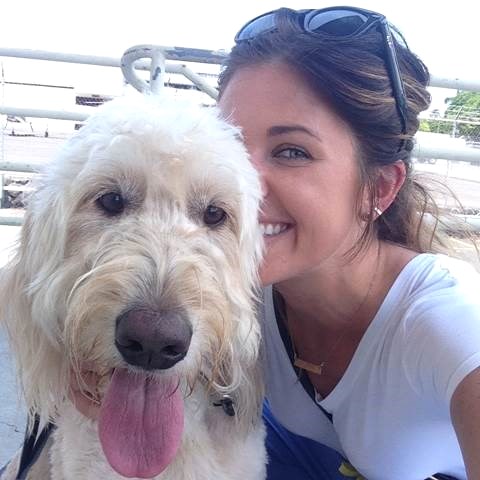 Moving to Hawaii is a dream come true for many people, but there's one drawback: it's a little tricky to move a pet there. Can it be done safely, though? Of course! Just ask Penny and her owner Jen, who recently made the move to Hawaii.

Jen contacted us after getting a job offer on the Big Island and we helped her organize her best friend's travel plans so that they could enjoy some time in paradise together.

Read on for more about their incredible experience (and try not to get too jealous).

I am employed as a physician assistant full-time but wanted to spend a year traveling as much as possible. I took a position with a travel company that would allow me to relocate anywhere between every 6 weeks to every 6 months. When they offered me the Big Island of Hawaii as my first assignment, I really couldn’t turn it down.

What were some of your initial concerns about moving a pet to Hawaii and/or about pet travel in general?

My biggest concern about relocating my dog Penny was flying her there. Going without her was not an option, but she is tall, lanky and weighs 60 pounds, meaning she would not be able to travel in the cabin. I was literally so worried about flying her as “cargo” that I called and asked Whitney (my initial PetRelocation contact) a million questions about safety, logistics, and success rates before I would officially accept the position.

Hawaii is also a rabies-free zone, and in order to maintain this they have a very strict screening policy and a 5-page checklist of requirements that must be met before your pet arrives. The penalty for missing or messing up a step is having your pet quarantined for 120 days, which was a very intimidating and sometimes overwhelming process to me, especially when I was trying to sort out all the logistics of my own move at the same time.

I think what surprised me the most about the entire process was how common it was. Until I relocated my own pet, I was operating under the misconception that it was a pretty frowned upon thing to do from a pet safety standpoint. It wasn’t until I started really researching the process and looking into my options that I realized how frequently it’s done.

PetRelocation alone had had enough successful and uneventful moves to put me pretty much at ease. Meeting the requirements to bypass the 120 day quarantine was probably the biggest challenge I had, but that is probably where I found PetRelocation to be the most helpful and most worth the investment. Whitney and Penney had gone through the process before and knew all the potential pitfalls and important steps/timeframes to meet, and this made it exponentially easier for me to keep on track with as little trouble and stress as possible.

How did Penny handle the flight and how has she handled the transition so far?

Penny seems to have handled the flight well. When I picked her up at the airport in Kona she was her usual wiggly, smiley self and of course making friends with all the airport and Kona Vet Service staff. She was a little worn out (do dogs get jet lag?) for a day or two but she’s transitioned really well since then. She’s still getting used to the geckos and wild chickens but we’re working on that :)

How do the mainland and Hawaii compare in terms of pet-friendliness?

We relocated from Charlotte, NC, which is one of the most dog-friendly cities I’ve seen. Going from having plenty of dog-friendly trails, awesome daycare/boarding options, and even dog bars to pretty slim pickings on the Big Island was a transition, but an expected one since basically every other amenity is scaled down here, as well. It’s taken us some time to find spots and a routine that works, but Hawaiian people are some of the friendliest, warmest people you’ll ever meet, so everyone has been very open for the most part.

It probably doesn’t hurt matters that Penny is perhaps the happiest living being on the planet, so she can usually force even a non dog lover (how does that even exist?) into friendship. And if nothing else, it’s forced both of us to get out more and explore our outdoor options.

My best advice is to find out ahead of time as much about the place you’re moving to and your method of getting there as you possibly can. I read up on Hawaii Department of Agriculture guidelines, individual airline’s pet safety records, and pet travel safety tips for about a month before I finally hired PetRelocation and it made the entire process so much easier.

Talk to anyone you know who might have done it before and see what their experiences were. Do your research, gather your pet’s health and immunization records, make sure you have enough meds/heartworm prevention/flea & tick prevention/whatever supplies you’ll need to last you for 1-2 months after you arrive so you don’t have to scramble to get established with a new vet, and then let PetRelocation do the rest.

PetRelocation had the most consistent, reliable and positive reviews of any of the companies that I considered. Every staff member I came in contact with was incredibly knowledgeable, reliable, and most importantly, a dog person (which is usually my go-to assessment tool in terms of gauging how much I can trust someone). The other places I researched weren’t even in the same league. Assigning Penny's move to a specialist that shared her name didn’t hurt either :).

Thanks to Jen and Penny for sharing their move with us! They probably don't need our help with this part, but either way we wish them lots of fun and luck in Hawaii.

Looking for assistance with your pet's upcoming move? Please contact us for a pet travel consultation.