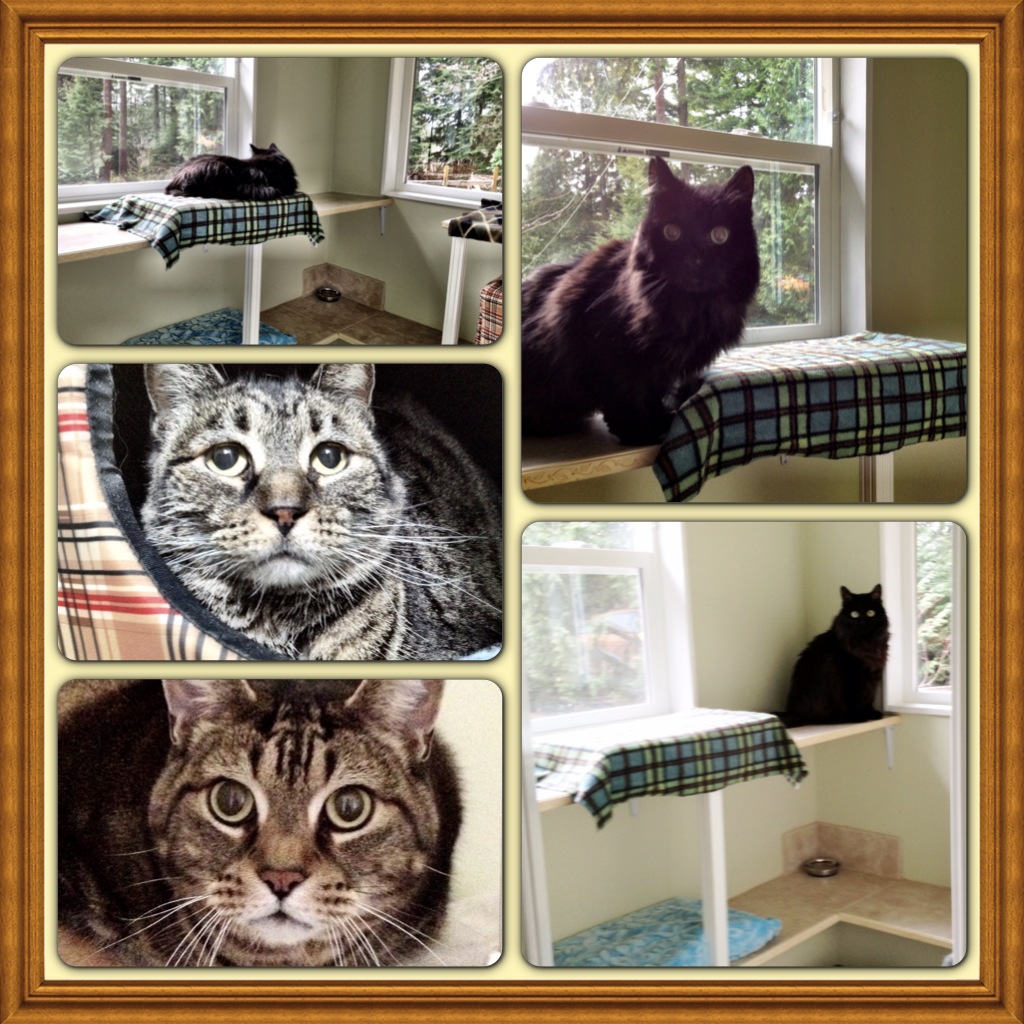 This month's featured pet move is quite a story. It's always an honor to make arrangements for a repeat customer (this is the third pet move for this family), and helping  these three very loved kitties make their way to New Zealand from Canada was an experience that reminded us why we love doing what we do.

Just take a few minutes to read the story of Rufty, Jesse and Pippin and you'll see what we mean (you might need a tissue or two—we sure did). Thanks so much to Jude, the cats' owner, for writing such beautiful answers to our questions, and please join us in congratulating our very special Pet Move of the Month!

This wasn't your first time moving internationally with pets. Can you tell us a little about the experiences you've had?

Moving four cats from Canada to New Zealand was a huge task, and not one we had anticipated. I had moved my cats before and knew how big a task it is. My two cats (Tufty Toes and Pippin) originally lived in LA, and when I moved to India to be with my husband, they came too.

That was a tough move and I hated putting the cats through it—India is not an easy place for pets. We left India after a year, and with lots of job insecurity, I had no idea where we were going to end up. Wonderfully, my parents in Canada offered to give our cats a loving home in their apartment in Victoria, alongside their two cats Rufty and Jesse! What a lifesaver that was, and they all did so well.

After quite a bit of reluctant globetrotting my husband and I have ended up living in New Zealand, where he works at Weta on Peter Jackson's movies. We are so lucky to be here and just love it (it's also where I grew up). Of course we really missed the cats, but the main thing was they were happy and loved. Little did we know how life could suddenly change! In October 2012 my dad was diagnosed with terminal brain tumours, and he died 19 days later. He really wanted my Mum to come back to NZ to live with us (this is her home country) and to bring the four cats, so my husband and I flew to Victoria to help get everything ready for the big move.

It was all so sudden and we were very unprepared to take such an epic process on. My first thought was “Rachel at PetRelocation!”  She had helped me through the two previous moves already, and I knew I'd be in great hands. She promptly got me organised with Sarah and Tyler, who handled the move right to the end. At first, we didn't realise all the quarantine requirements and vaccination schedules that would be required for travel to New Zealand.

When we found out that the cats would need to wait six months from the date of their rabies shots, it was quite a shock. Mum was leaving right away, and we were faced with the thought of five months of boarding before the cats could fly. I have to say—they were anxious and tear filled days as we wrestled with what to do.

My dear cat Tufty was a very old gentleman at this point. He had traveled the world with me, and I hated putting him through it again. He had lost a lot of weight, lost most of his sight, and definitely was in the last period of his life. He still loved food and laps and beds and cuddles, so we just had to hope that he would cope with it all. 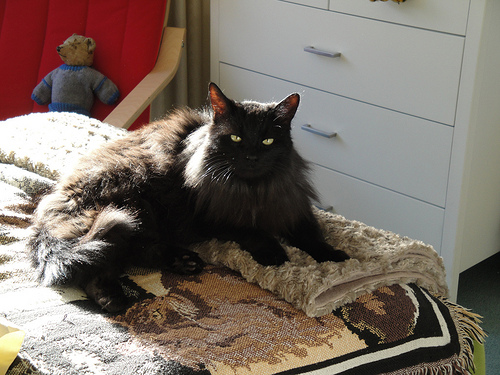 The cats moved over to the mainland to live with the wonderful Kathy at Phat Cat Inn near Vancouver. Sarah had found it and what a gem! We really can't thank Kathy enough—it's a big job to take on cats for such a long stay.

She sent us regular emails and photos and we were sure that the cats were being loved. We couldn't have asked for more! She got to know them intimately, which really helped to make sure they were content. It was this close attention that helped us through a really sad time. In May, it became obvious that Tufty just wasn't doing well anymore. He had started off well, being bold and adventurous, and adapting quickly, but he became completely blind, and had anxious periods that were affecting the others as well. It was awful, but we knew that we had to make the best decision for him. A 12-hour flight to New Zealand was out of the question, and I couldn't live with the thought he might die on the flight.

In the end, after a few days of extra pampering and love, we had him put to sleep. I have to say—it's a terrible thing to decide from the other side of the world, and makes me shed a tear just writing about it. We all know (and Kathy and the vet agreed) that it was the right thing to do, and this is life with animals, isn't it. How lucky I was to have loved him.

So, it was a tough last few weeks before the move, but as the flight date approached we were beyond excited. Poor Kathy had to say goodbye to the gang, and I'm sure they will have missed her. They spent a night in downtown Vancouver before the long flight to New Zealand. Then they had a comfort stop and another flight down to Wellington before the drive out to quarantine!

Tyler kept us fully up-to-date at every step with flight tracking and updates from her agents in New Zealand. So many steps for the cats—so many different environments and people before they finally got released from their 10-day quarantine. I was worried by the time they made it to their new home they would barely resemble the fun personalities we used to love!

The day they arrived was just amazing—one of those days you'll treasure forever. We lifted their giant crates into the living room and opened the doors. They were all big eyes and careful steps—very apprehensive at first, but so bold and inquisitive. Rufty the Brave was the first one to figure it all out. Within a few minutes he was purring and purring, a blissful expression on his face as he was showered with love. He didn't stop purring for several hours—even walking round the house with his motor running loudly. 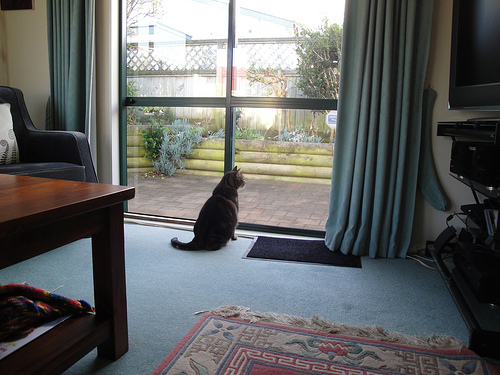 Jesse took only a little longer. He walked around, ogling through all the windows at the views outside. There was a moment when I reached down and tickled his chin and suddenly his expression changed and he started purring. I could see that the penny had dropped and he was sure this was all really happening and he was safe. It was wonderful watching that moment of comprehension—so clear and full of happiness.

My little girl Pippin has always been the shyest and most timid. She looked all around and then found a really good spot to hide under a chest of drawers. I visited often, and she curled into a ball and slept contentedly. We all expected she would take a couple of days before really venturing out (as she had done in previous moves). It was a huge surprise when, five hours after arriving, she came out to the living room, found a rug she used to love in LA, and rolled and rolled and rolled all over it. She was so happy! Purring and rolling and playing with a toy. Amazing! She looked all around, had a wash and then joined the other two in the sunshine in Mum's bedroom. Utterly incredible.

I've never seen such obvious expressions of contentment and happiness in animals as that day. There was no doubt they knew they were home with their people, and everything was okay now.  It's only been eight days since they arrived, but they are completely at home. All their little personality quirks, games and tricks they used to play—everything is back.  I doubt there is a happier house in all of Wellington! 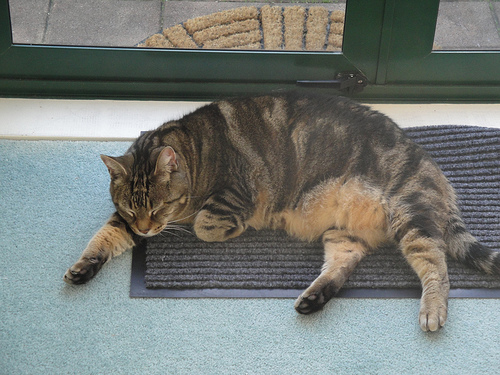 Although it's a huge and arduous process, it's also a well-oiled machine, and moving from countries like Canada and New Zealand is not hard (if you have someone organising it for you!). I hope we never have to do it again, but I can say with conviction that even a crazy move like this is possible and your pets will be ok at the end of it.

What is life like in New Zealand so far? Do you think it’s a pet-friendly place to be?

New Zealanders love animals, and it's as good a place as any for pets, I think. We're used to having indoor cats—which is great for their health and lifespan and also for native wildlife—but most people in New Zealand think that is cruel. Lots of native species have died out from predation by cats and dogs, so I'm glad we're not contributing to that, while still having happy cats! I'm sure it's a particularly wonderful place for dog owners as well—so many lovely parks and wild areas to enjoy right in the cities. We're very spoilt here. 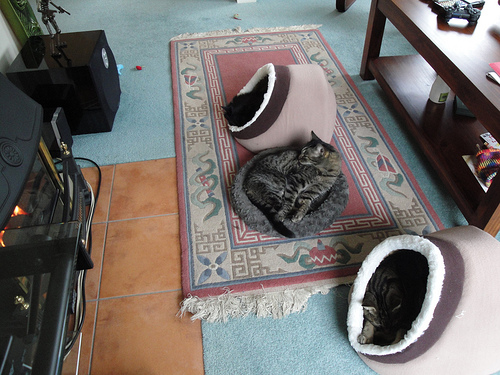 If you think there could ever be an occasion in the future you may have to move countries, make sure your pets have all their vaccinations up to date (most importantly rabies). And try and plan well in advance. If you have to wait for six months after blood tests confirming the vaccine is working, that can be hard.

And otherwise… call PetRelocation!  They will hold your hands and paws the whole way through. It's not a cheap thing to do, but if you need help, PetRelocation is the best you can get.

Contact PetRelocation with your questions about moving pets to New Zealand or anywhere else life may take you, and happy traveling, everyone!