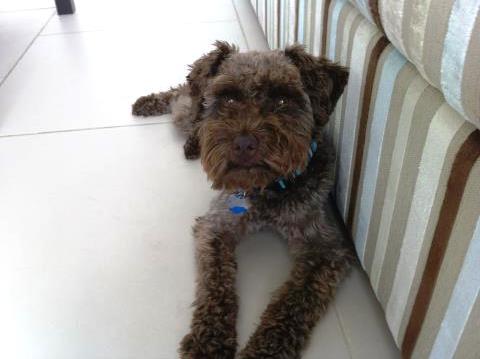 When I was offered a teaching job in Kuala Lumpur, I jumped at the chance to return to my international school roots. My boyfriend, Emmett, and I were excited for the move but worried sick about how we would get our beloved pup to Malaysia. That's where PetRelocation came in!

I heard about PetRelocation from my brother, who used their services to move his dog Kupo from Vancouver, Canada to Manila, Philippines. He only had good things to say about their service (despite the fact that he contacted them very last minute) so I knew that Russet would be in good hands.

Our Client Care Specialist was Mandy and she was fantastic! Not only was she knowledgeable and supportive throughout the moving process, but she also took the time to answer all of the nervous puppy mommy questions I had about the move. Mandy was in constant contact with our vet, making sure that all of Russet's vaccines and paperwork were in order. She really took a load off our minds during what could best be described as an extremely chaotic time.

During Russet's trip, we were able to track his flights and received regular update emails from Mandy telling us exactly where he was and how he was doing. When he got to Malaysia, he was put in quarantine for the mandatory seven days. One of PetRelocation's agents visited him every day and made sure that none of the dogs in his quarantine block were sick. The quarantine facility is very far away from the city so we weren't able to visit him during his time there. It was nice to know that someone was looking out for him though!

Russet is adjusting well to his new home. The humidity has been difficult for him but I think he's happy to be back with his family. So far, we haven't been able to find any pet friendly hangouts in our area but we plan on exploring more when we finally get a car. Malaysia is far less dog friendly than Boston but Russet has still managed to win over some of our neighbors with his fuzzy good looks.

We are so happy we chose PetRelocation for our move and wouldn't hesitate to use them again if we end up moving again!