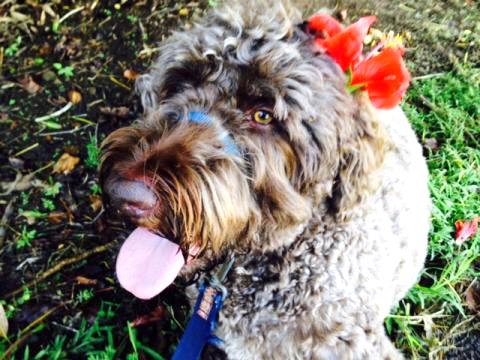 We weren't sure when we moved to Hawaii if we were going to be able to find a place that would be good for our 93 lb Labradoodle named Kahuna.

We had heard that a lot of vets in Hawaii were filled up and wouldn't take new clients, and we also read that it was hard to find a house to rent that would take pets.

So in terms of finding a vet for him, on the Big Island of Hawaii it is very remote and we needed one that could not just take him but could also attend to his very special medical requirement of having Addison's Disease, which means he needs a shot once a month and he needs a pill every day.

Also, we planned on renting at first and we needed to find a place that would take a rather large dog. So we left Kahuna in foster care in New Jersey until we could make sure we could provide a place for him. Fortunately for us, everything did work out and we were able to contact our foster family with the news that we would be starting the process of getting Kahuna shipped out here. Now the hard part began.

I personally quickly became very flustered and stressed thinking I might make a mistake on the paperwork that might in some way keep Kahuna from reaching us in a timely and efficient manner. Especially with his medical issues, high stress situations can be hard for an animal with this condition, which only gets harder because he is such a large animal.

Kahuna actually needed crate extensions on his XL crate, which his foster mom gladly helped attach in New Jersey. I was also relieved beyond measure to find PetRelocation; they coordinated everything from the crate extensions to the vets, the airfare to the forms and instructions about how to receive your pet. It was flawless.

Kahuna's plane went from NJ to CA to Honolulu to the Big Island of Hawaii. I received updates all along the way, and Kahuna had someone meeting him at each stop to make sure he was okay. I felt so safe having Kahuna's care in Sarah and Penney's hands. They took care of EVERYTHING! It was by far one of the greatest experiences I've had as a customer.

Kahuna is now in Hawaii and has adjusted really well. He does miss the snow but he is enjoying the fresh water streams.

I highly recommend PetRelocation to anyone who wants to have peace of mind. They take as much care as you would yourself in transporting your pet on your behalf.