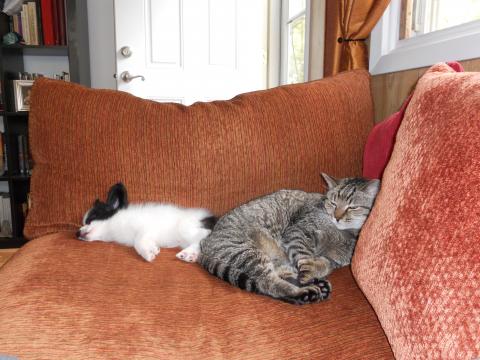 I saw another poster say Doha isn't a good place for a dog. I don't know that I agree with that. I moved over here in May with my cat and papillon, and I haven't found it too bad. There is a pretty active community of animal lovers here, and I'm happy with our vet, QVC.

I think it's easier with a smaller dog because they don't require as much walking. Doha is not a particularly pedestrian friendly city, so it's not like in the States where you can set out for a variety of hour-long walks. A lot depends on where you are. We initially lived in a compound that was very dog friendly, so we were able to circle the compound when I took him out (which came out to be about a 20-30 minute walk depending on how much sniffing was going on).

We just moved out to The Pearl and there are some great walking paths here. Our exercise sessions now run more like 45-60 minutes. The main challenge is getting to them, as there is a fair amount of car traffic here (especially at night) and you either have to walk across four lanes to get over to the path, or walk behind a valet parking stand with a lot of people milling around.

Still, the other poster is right that people from the region are often unfamiliar with the idea of dogs as pets. Yet, I haven't had any trouble, really. I've found people to be curious more than anything. People have literally stopped their cars and asked to take my dog's picture, and I've had a lot of children come running up and ask to pet him. Usually the parents are okay with that and have even asked me questions about where I got the dog (they're usually disappointed to learn I brought him from the States).

You do need to keep in mind that many people from the Middle East and Asia are quite afraid of dogs—even my five pound papillon (he's a puppy in the pic I uploaded, but he's not much bigger than that even now).

The woman who is the concierge in my building asked me the other day if Oliver, my dog, was a husky. I could only respond, “No, he's not a sled dog.” She'd assumed he was a puppy and would get significantly bigger. I assured her that wasn't the case. Regardless, she's rather terrified of him, which is a shame because every time she sees us going out and says hello, Oliver tries to go over to her to return the greeting. But I need to hold him back; I can see it would make her uncomfortable.

Thank you for your help,

Looking for assistance with your international pet relocation? Contact us to set up a pet shipping consultation.