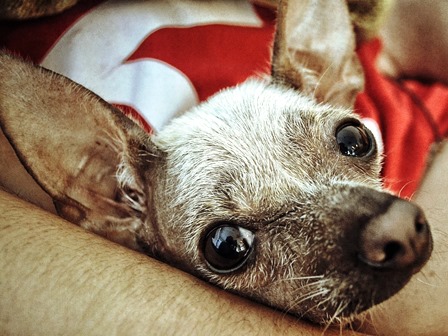 Relocating a healthy pet can take quite a bit of time and effort, so imagine the stress the caretaker of a special needs pet might feel at the beginning of a move.

We've helped to relocate older pets and have assisted a few with minor health concerns, but until recently PetRelocation had never had the chance to meet a dog like Scooter. Born with only two legs, Scooter was blessed to find his way to a loving home as a puppy and last month moved with his family to Malaysia.

Scooter's owner Kim was kind enough to share the story of moving Scooter and their other dog Harley from Texas to Malaysia, and she offers some excellent info about crate training, quarantine, and dealing with the stress of a move. It's a great read for anyone planning to travel with a pet!

Tell us a little bit about Scooter.

He was born from a litter of three puppies, and two out of the three were born with no front legs. My Aunt Sharon, a breeder, informed me about Scooter and his special needs and I told her that I would take him. She agreed to let me have him knowing I would give him the best care. So we took him in and he joined our family with our other hairless, Harley.

The first few months were difficult. Scooter was so tiny and could not move. His back legs were like rubber. In time, after working with him and using popcorn to entice him, he began moving. Soon he would be hopping like a bunny rabbit and walking on his back legs. He grew into a wonderfully happy and healthy guy. Now he is loved everywhere we go and he gets lots of attention.

What were your initial concerns about moving Scooter?

My husband took a job overseas in Malaysia. We were here before a few years back and left the dogs at home. It was heartbreaking for me and I missed them terribly, so this time around I refused to go without my babies. I began to do some research and found PetRelocation online. After speaking with Cara and Tyler I decided I would go for it.

I had a lot of reservations and anxiety, as Malaysia is not a very dog friendly country. As time got closer I became more and more apprehensive about the whole thing. I had fears about the long flight, and wondered if Scooter would be okay. I guess my biggest fear was that since Scooter was special needs they would think he was sick and take him away. Tyler reassured me this was not the case. I have to admit that in the back of my mind It was still a big concern for me. 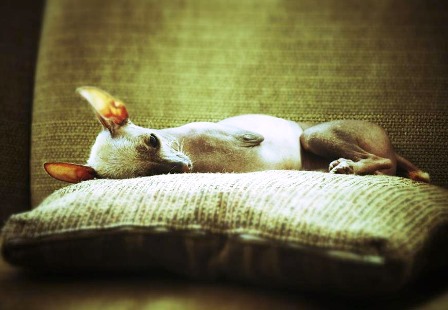 What would you say to someone who was getting ready to move a special needs pet?

If you have a special needs pet, do not let that stop you from taking them with you. They are part of the family and you shouldn't leave them behind because of this. Start making the preparations for them early on. PetRelocation will definitely help in making sure you have what you need for your babies.

Tyler called the quarantine ahead of time and let them know about Scooter, so they were expecting him. I highly recommend taking your pet in cabin if you can. There are about three airlines that allow you to take your pet in cabin internationally if they are small. I also started early with using the kennels for the dogs. I went out and bought the kennel that I would be using for them to travel in. At first it wasn't an easy process—I started putting them in for a couple of minutes and worked my way up to a few hours. I left the kennels open, and before long the dogs would go in there on their own to sleep during the day.

I HIGHLY recommend starting this process early. Take pee pads and pet snacks on the flight. Put pee pads in the kennel in case of an accident. We did have one so it was good we were prepared.

What was the biggest surprise you encountered during this process?

I guess the biggest surprise for me was how well the dogs did on the trip. I worried myself sick about how they would do on the long flight. The actual flying time was about 24 hours and three different flights, so including the 12 hour layover in Frankfurt and Thailand it ended up being about 40 hours of travel time.

They did really well, though. On the flight they whined very little. When they would get a little loud I would take the kennel to the bathroom and take them out and hold them and offer them a pee pad. I am very proud of them and I was truly surprised at how great they did. No one even knew they were there under the seat. They traveled like they had done it 100 times before, not like this was their very first time to ever be on an airplane.

I have to give a shout out to Lufthansa airlines. When I checked in at the airport with the dogs they were very nice and friendly. The agent had me take the dogs out so she could see them and hold them. They all went nuts over the dogs. I told her I was terrified to fly with them and it was their first time. She reassured me that I should never be afraid to fly with a pet on their airlines. I told her I was afraid they would bark and whine. She said if they do no one will hear them because of the sound of the engine. She was right!

Can you tell us about the arrival and quarantine processes?

Well when we finally arrived in Malaysia 40 hours later, we were all exhausted. I had to go check the dogs into immigration at the baggage claim. The lady at the pet immigration desk was not very friendly. I gave her all my paper work and signed them off. It was VERY difficult to walk away from my babies and leave them in the hands of a stranger.

As I went to my house that night I cried all the way. I could not sleep that night worrying about them. First thing the next morning, I took the one hour ride to quarantine to see my babies. Do not forget to take your passport! I checked in and they told me where the dogs were located. I took the long walk to where they were and was truly relieved when there were my two babies looking out their screen door at me. My heart was overjoyed that they were there and alive and well, and they were just as happy to see me.

The quarantine room they stayed in was big. I went to see them every day except one day. It was very hard walking away from them and leaving them there. The whines and barks always tugged at my heart. The truth is that a week is not bad at all. The quarantine place was pretty good; their room was always clean when I went to see them and they always had a full dish of clean fresh water and food. They took care of their basic needs.

I highly recommend going to see your pets as much as possible if you are able to. Everyone knew who Scooter was. I ran into one of the workers one day, and she told me that when Scooter first came she laid him on a towel and put the food and water right by him. When she came back later to check on him he was in a different spot. She was shocked to know he could move! I thought that was pretty funny. Scooter has no problem getting around for sure :). Although a little scary for us, I want to reassure you that the quarantine will care for your pet. Not like we would, but they will meet their basic needs. 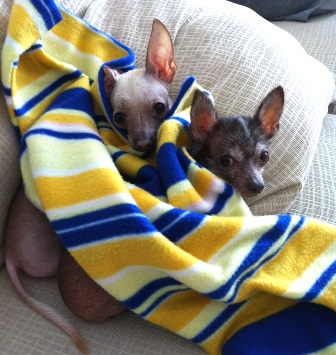 I was ecstatic the day the boys came home. They are now doing well here in Malaysia and they have adjusted very well to life in a condo. The condo we live in is mostly Japanese; they love dogs and there are lots of dogs here in our condo. I have made many friends here because of the dogs.

Scooter is still the talk of the town. Poor Harley gets left in the cold, LOL. I miss the days of putting the dogs in the car and going here and there—things are different here for sure. There are some nice doggie hotels to leave them when we travel, though.

Overall I have to say our experience was mostly a positive one. I am thrilled to have my boys here with me and I would do it all over again. Thank you PetRelocation, and I want to give a shout out to Tyler and Cara for making this all possible and making it a pretty smooth transition. I'm happy to have my WHOLE family here together at last.

Thank you to Scooter's owner for sharing this journey! Need help planning your own complicated pet relocation? Contact us for assistance.